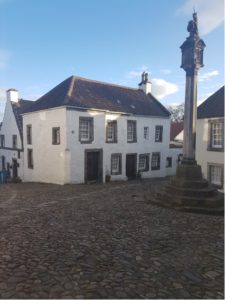 Our bespoke Outlander Tours let you be in control of how you follow in Claire and Jamie’s footsteps.  Our office is located just down the road from Aberdour Castle, better known to fans of the television series as the monastery where Jamie recovers after his ordeal in episode 16, season 1.  It is also contender for being Scotland’s oldest standing castle, so a visit here, where the present truly meets the past is highly recommended.

One particular bonus of choosing Celtic Heritage Connections for your Outlander tour is that Charlotte has worked at a few of the historical sites during her time at Historic Environment Scotland and has worked closely with Sam Heughan and Graham McTavish for their recent show, Men in Kilts.  Together we can tailor your Outlander experience to what you want it to be with advise given during the planning stage, choosing the number of days it would take and finalizing an itinerary, giving you time to emerge yourself in the beauty of Scotland while being driven by your own historian so you can sit back and relax between locations.

Example of a one-day Outlander Tour

Pickup from Edinburgh at 8:45am.

Starting at Aberdour Castle – The monastery where Jamie is taken after his ordeal with Black Jack Randal.  Considered to be one of the very oldest castles in Scotland with construction starting in the 1100’s.  Near by you can also visit St Fillan’s, a wonderful example of an 1100’s Norman Church Building.  Aberdour was once the one-time home of the Regent of Scotland, The Earl of Morton, beheaded by the very machine he had lobbied to be installed in Scottish executions, The Maiden.

A drive through central Fife will take us to Falkland - Travel to 1945’s Inverness, stand and look up to the window where Frank witnessed the Highlander observing Claire in Mrs Baird’s Bed and Breakfast.  Falkland for the most part has the feeling of letting the modern world pass it by, greatly helped by the presence of one of the finest examples of Renaissance architecture in Scotland, Falkland Palace, a favoured retreat of the Scottish Stuart monarchy. It was here that James V died 14th December 1542 just days after the birth of his only legitimate heir, Mary Queen of Scots, where he was reputed to have said ‘It came wi a lass, it’ll gang wi a lass’.

Back on the road we will head to Culross - Get your walking boots on to traverce the steep hills of the beautiful village of Culross, better known as Cranesmuir, home to Geillis Duncan.  With large swathes of this picturesque village under the care of the National Trust for Scotland you are transported back to yesteryear.  With the opportunity to buy seasonal herbs from the organic Palace Gardens you can perhaps take the opportunity to channel your inner Claire!  A short drive and we arrive at West Culross Kirk, the Black Kirk, where the youths of Crainsmuir became ill and Claire’s intervention made her an enemy in Father Bain.

Optional extra for the sure footed, weather permitting, Dunmore Park House – The field hospital where we are first introduced to Claire at the close of World War II.  The house is particularly ruinous though what remains, with a little imagination, you get an idea of how magnificent this home to the Earls of Dunmore would have once been.  A relatively young building on our trail having been built in 1822 for the 5th Earl of Dunmore.  This location is a must for the fan who wants to visit one of the quieter filming locations which is not included in many of the public tours.

Heading east once more we travel to Linlithgow Palace – While the exterior may not be recognizable as Wentworth Prison, the interior is clearly the realm of Black Jack.  Entering the interior courtyard visitors are treated to their first view of the elaborate fountain built under the orders of James V in 1538. Standing at 16 feet in height it is awash with beautiful carvings, all with their own story to tell, captivating children and adults alike.  In 2007 Historic Environment Scotland restored the fountain, with water turned on only for special occasions, ensuring this beautiful piece of craftmanship can be enjoyed by future generations.

A short drive and we arrive at Blackness Castle - This iconic castle is instantly recognizable to any Outlander fan as Fort William, the scene of Jamie’s flogging.  This remarkable castle is truly one of a kind in Scotland, The Ship That Never Sailed, referred to as such due to its shape on the banks of the River Forth.  The castle has a varied and intricate history with it uses including a prison, a fortress used by the British Army after the Union and an ammunition deport to name but a few.

Finish at Midhope Castle - Our day is finished off by a visit to the ultimate pilgrimage location, Lallybroch, or rather Midhope Castle.  Sadly the castle can only be viewed from outside but the exterior is the single most important photo opportunity for the majority of fans.  Walking up the gravel drive and taking in the first ever sight of this iconic castle is often described as being a deeply emotional experience for many. This concludes what will be a day filled with memories, fun and facts and guaranteed to be one set of holiday photos that your friends will want to see and a holiday they will be excited to hear about.